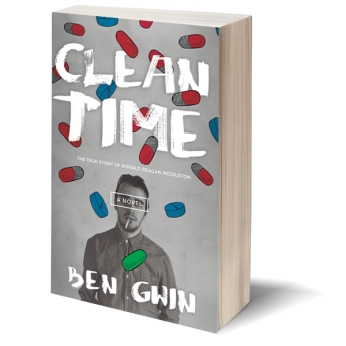 “Ben Gwin writes like F. Scott Fitzgerald high on meth and Clean Time is The Great Gatsby for a generation that thinks fame is the answer to every question.”
–LORI JAKIELA, Portrait of the Artist as a Bingo Worker

“A prescient mash-up of the heartland opioid crisis, violent backwoods populism, and the hallucinatory, celebrity-obsessed world of reality television… a nightmarish dispatch from America in the age of Donald Trump.” –DEREK GREEN, New World Order

Beginning with journals written in jail, Ronald Reagan recounts his days in Booth, North Carolina, where he had a semblance of peace, a job manually distressing designer jeans, and a girlfriend with a lucrative drug dealing operation. After his inevitable arrest, Ronald Reagan’s parents send him to a North Jersey rehab center, which doubles as the set of The Recovery Channel’s reality TV show, Clean Time. Here, Ronald Reagan is prescribed Nedvedol, a new drug engineered to end all addiction. His viewer ratings spike as he interacts with fellow addicts and meets a new love interest, quickly achieving celebrity status. Though he seems happy performing for the cameras, his journals tell a different story. He’s become dependent on Nedvedol and can think of only one thing: escape.

Chased from rehab back to his squalid life in Booth by a salacious TV producer, a relapsing counselor, and a serial killer who targets addicts, Ronald Reagan struggles to stay clean while continuing to hit new bottoms.

As Ronald Reagan’s life spirals out of control, Harold Swanger’s narrative interruptions become more frequent, his endnotes increasingly dubious. In a poor attempt at academic notoriety, Swanger presents Ronald Reagan not as a troubled, lost, and obnoxiously privileged drug addict, but as a new kind of American hero.

In this sprawling and ambitious debut novel, Ben Gwin masterfully balances farce and irony with a genuine compassion for the large cast of characters that fumble through a nightmarish and all-too-familiar version of America.

“If Vladimir Nabokov, George Saunders, Denis Johnson, and Hunter S. Thompson were trapped in an elevator for a month, they might conceivably come up with a book as funny, frightening, and entertaining as this one. Ben Gwin’s brilliant tale of Ronald Reagan Middleton’s loss and salvation is as profoundly American a novel as I’ve read in a long time.” –MICHAEL BYERS, The Coast of Good Intentions

“Clean Time is a meta novel so good it will end all meta novels, a satire so current it reads like a headline in The New York Times. Ben Gwin has dumped the prison memoir, the recovery memoir, the academic treatise, and an unscrupulous blast of reality TV into the literary blender and come up with something entirely new and entertaining and horrifying.” –DAVE NEWMAN, Please Don’t Shoot Anyone Tonight

“Clean Time is an exuberant debut from novelist Ben Gwin, a satirical vision of the American nightmare that’s a pure joy to read. Like a Nabokovian Eddie and the Cruisers, Gwin’s novel goes in search of the missing Ronald Reagan, break-out star of The Recovery Channel’s hit reality show Clean Time, and finds instead an America gone off its meds. Clean Time is a darkly comic odyssey through a land of serial killers, hipster poets, and Bob Seger.” –KRISTOFER COLLINS, Manager, Caliban Book Shop

“Read Clean Time. It is many things; dark, inventive, hallucinatory, funny as hell, but above all just hard to put down. And like all journeys worth taking, you won’t always know where you’re headed, but do so with Gwin and you will be rewarded for it.”
–ADLAI YEOMANS, Owner, White Whale Bookstore

Ben Gwin is the author of the novel Clean Time: The True Story of Ronald Reagan Middleton (Burrow Press). His writing has appeared in Belt Magazine, The Normal School, Gulf Stream and others, and anthologized in The Pittsburgh Anthology (Belt Publishing) and Voices of the Rust Belt (Picador). Ben grew up in Titusville, New Jersey. He lives in Pittsburgh with his daughter, and is currently working on a nonfiction book about parenting and the opioid crisis. Please give him a grant.